It's been well over 2 weeks since I've been in Japan (wow has it been 2+ weeks already?) Which means another update is in order! Nothing has changed much since my last update, but I thought I'd briefly talk about what has happened in the time I've been here so far.
Lets' start off with Tokyo Orientation, shall we? We had 2 days jammed packed with seminars, speeches and presenations to prepare us for our new lives in Japan. It started on August 4th, just a day after we arrived in Tokyo after an 11 hour flight (and a 2 hour bus ride). We stayed at Keio Plaza in Shinjuku, which was very luxurious! I do feel bad for the other guests who also stayed at the same hotel during our orientation, especially when there are over 900 of us trying to use the elevators all at the same time... (I had to wait 30 mins for one of the lifts once ಠ_ಠ) 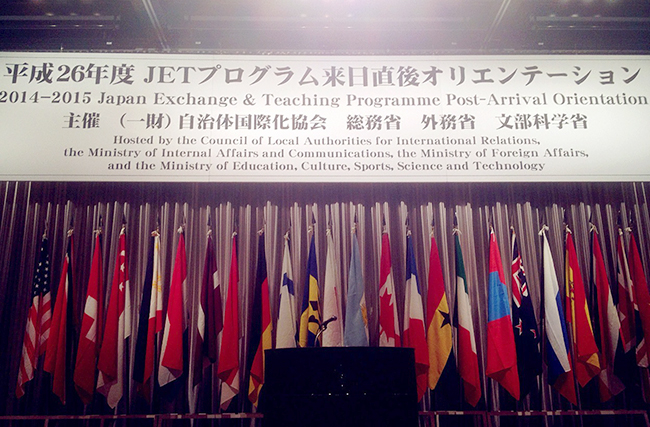 Because Tokyo Orientation is very formal, we had to be in business attire for the presenatations. Shirt, blazer, tie (for men) — the complete works were required for the opening ceremony, while "cool-biz" was allowed for the remainder of the sessions (which simply meant no blazer and tie necessary). Wearing a suit in the middle of a Japanese summer is not exactly my first choice when it comes to clothing, but as long as you stay inside the hotel, it's bearable. While the seminars were very in depth (sometimes too long), and full of information, I felt like a lot of it wasn't particularly relevant for my situation. For instance, I won't be able to apply the key points from the session on teaching grammar and/or writing at my elementary schools. As much as I dislike the infamous JET acronym — ESID, which stands for "every situation is different", I'm finding it more and more relevant as each day goes by. (I might elaborate on this in another post).

Besides the lecture-esque presentations, we ended with a buffet dinner on the first night. I was finally able to meet other Wakayama JETS — there's only about 15 new Wakayama JETs this year, quite a small group compared to other prefectures such as Hyogo or Nagasaki. Unsurprisingly, they're mostly from America, but coincidentally the only other New Zealand Wakayama JET (he's from Wellington) has been placed in the town right next to mine. On the second (and last) night of the orientation, we were kindly welcomed by the New Zealand Embassy in Shibuya.
On Wednesday, I gathered with my fellow Wakayama JETs at 7am, and we headed to Haneda Aiport for a domestic flight to Osaka. It was only a short flight, meaning it won't be too impossible for me to fly to Tokyo, (as long as I have the funds to do so!) My supervisor, another colleague from the Board of Education, and the other JET in my town came to pick me up at Kansai Airport. After an hour or so of driving, I finally arrived in Yuasa!